Women and children. Two segments of the population we cherish and try to protect. But, sadly, not if the woman is in the prison system.

Now, don’t for a minute think that I’m soft on women who commit crimes because I’m not. But generational incarceration is a real thing and we are doing little as a society to stop it.

Since 1980, the U.S. has seen a rise of more than 500% in the number of inmates in our jails and prisons. But females make up the fastest growing segment of prisoners, up more than 700%. Of the 1.2 million women currently under criminal supervision – in local jails, state or federal prison or under parole or probation – a full two-thirds are mothers. Many are single mothers.

Think of all the children left behind. 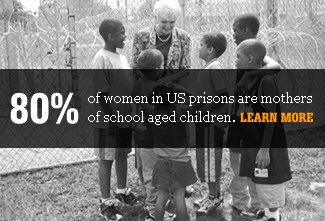 Research shows that children of incarcerated parents have significantly higher rates of being expelled from school, turning to drugs or alcohol and of going to prison themselves. It is a terrible cycle. And one major thing that might make the difference to the child – continued contact with a loving parent – is the very thing our justice system often denies them.

The Marshall Project along with Teen Vogue Magazine recently hosted a video chat with formerly incarcerated women and the adult daughter of a convict. Their candid conversation about life inside a women’s prison might shock you.

Kyndia Riley was just 2 when both her parents went to prison. Mom was sent to Connecticut, her Dad to a prison in Pennsylvani, Kya. Little Kyndia was raised by relatives in Virginia. It took 10 hours to drive to see her mother and there was no money for an overnight hotel stay. As she grew older she realized the indignity her mother had to go through just to enter the prison visiting room.

“You have to take off all of your clothes, do the squat,” Kyndia told the interviewer. “When I would go visit her and it would happen to her it was like she had to take a moment to herself because she just had a guard fondling her – naked. She has to get herself together because her dignity has been stripped.”  Kyndia, now in college, also admitted that she deliberately acted out in school thinking if she was bad enough she too would be sent to prison and then she’d get to be with her Mom. Only after the dean of students asked her, “Hey, what is going on with you?” did she realize the futility.

If only there were enough concerned adults to sit down and really communicate with the children of incarcerated parents.

Ex-con Ayana Thomas was asked what it was like to try to parent her child from behind bars. During visits an inmate gets a quick “initial hug,” Ayana said.

“But they can’t sit on your lap, you can’t hold their hand.” The visits with her daughter were so emotional during the last nine months of her sentence Anaya told her family not to visit anymore.

“I could do my time easier without the stress of (it,)” she told the reporter. “It took me two days to recuperate from a visit, from my daughter crying. You know, just the whole ripping you apart all over again.”

Former inmate Sara Zarber said she could relate. “My mom visited me when I was incarcerated and she would talk about going through the metal detectors and, like, having to take off her bra sometimes. Having to go through that and the shame of it she felt.  So, I told her at one point, ‘Don’t come.’”

If only prisons made it easier for families to remain close.

Prison jobs earn the inmates less than a dollar an hour, about $13 a month in Ayana’s case. With that they must buy phone time home, personal products like shampoo, toothpaste or monthly hygiene products – which often sell at the prison commissary for inflated prices. (Just two months ago a memo went out from the Federal Bureau of Prisons requiring a range of feminine hygiene products to be distributed free. State prisons and jails were not included in the directive.)

There’s a bill pending in Congress now called The Dignity for Incarcerated Women Act. It requires the Federal Bureau of Prisons to consider the geographic divide between women and their children before assigning a prison. It reforms visitation policies, outlaws charging inmates for essential hygiene products and prohibits handcuffing and solitary confinement for pregnant women.

Here’s hoping state prisons also realize that anything we do to strengthen family bonds could help all of society down the road.