Why does this keep happening? Surely, people know by now how dangerous it is to leave a child in the car in the summer time! It is deadly dangerous yet it keeps happening year after year. It makes my heart hurt.

Consider this my annual reminder to never – ever – leave a child alone in an enclosed vehicle, no matter the time of year. Children are especially vulnerable to heat stroke. As their internal temperature rises their little hearts beat faster which, in turn, diverts blood from their lungs, brains and other internal organs. The result? A painful headache and excruciating spasms of arms and legs. It is a terrible death. 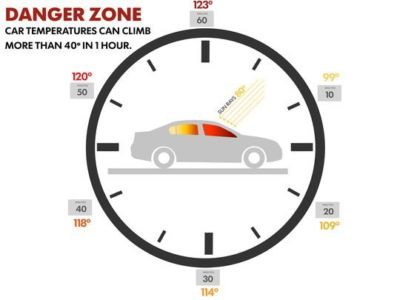 Experts say if its 93 degrees outside the interior of a car can quickly reach 147 degrees. Imagine trying to catch your breath in a small space that is that hot.  Now imagine that there is no way to escape because someone you trusted either forgot you were there or deliberately left you there to, as one pot-smoking young mother of two put it, “to teach them a lesson.” Both her daughters died while she took a long nap inside.

Since 1990, more than 800 kids have died in hot cars. Some were the result of terrible accidents, others because of criminal neglect. Through the end of July NoHeatStroke.com reports, nationwide, at least 29 young souls have been lost in this torturous way.

Texas holds the dubious distinction of being the leading state for hot car deaths of children. And earlier this month, outside Austin another dependent person, a 48-year-old developmentally disabled woman, went missing from her care facility and was found dead in a hot van outside. When or how she got there is unknown.

And let’s not forget our pets. The American Veterinarian Medical Association says hundreds of pets die from heat exhaustion every year. Three police K-9 dogs have died so far this year after their officer-handlers left them in their vehicles. It is faulty thinking to believe your pet will be okay if left in the car for “just a few minutes” or that “cracking the window” makes it okay.

The news will surely get worse because, traditionally, July, August and September are the deadliest months for hot car deaths of children. But they have happened in every single month of the year, including January. It doesn’t necessarily have to be hovering in the 90’s outside for it to be triple digits inside a car.

I’m sorry to say there’s not a lot that can be done about negligent or criminally inclined parents until something horrible happens. But there is something that can be done to help frazzled parents who simply – and honestly – forget their child is strapped into the back seat of their car. It’s called the Hot Cars Act of 2017 which would require all new cars to include an alarm alerting a departing driver if a passenger remains in the back seat.

“Our cars can already alert drivers when they leave their keys in the car, their lights on, or their trunk open,” Congressman Tim Ryan (D-Ohio) said.

“And cars are mandated to have seat belts, interior trunk-releases, and rear backup cameras,” he said. So why can’t this inexpensive technology also be included?

The answer is – it can be – and it is already available on a few new cars. Write your representatives in Washington and urge them to get behind this important legislation.  Innocent lives depend on it.