Professor P. M. Forni, 67, died earlier this month in Towson, Maryland.  He was born in Bologna, Italy and became a proud U.S.   citizen and educator. I didn’t know the man personally, but I am sad to hear that he is gone.

Forni was one of the last clarion voices to advocate for civility among people.  You know, the human behavior that comes from a place of respect, politeness and graciousness? Civility is rare to find in these oh-so-discourteous times but Professor Forni’s work lives on for anyone who would like to explore how we might change today’s ugly discourse.

Pier Massimo Forni was a professor of romance languages and Italian literature, a member of the faculty at Johns Hopkins University in Baltimore, Maryland where he co-founded The Civility Project in 1997.  Among the books he authored were “Choosing Civility” and “The Civility Solution.” 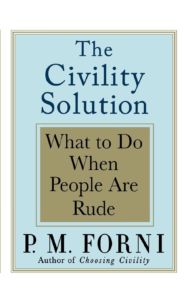 His wife, Virginia, told an interviewer, “The first book is how not to be rude and the second book is what to do when other people are rude to you.”

What struck me most about Professor Forni’s passion was how firmly he believed civilly-minded human beings could ward off crime.

It might sound like a quaint notion to some, but the simplest solutions are often the best.  As my mother, like yours probably said, “Be nice to people and they will be nice to you.”  Simple. Elegant. Effective.

Professor Forni also believed that if we teach youngsters from all walks of life how to manage conflict in a respectful manner, “We will have a less uncivil society, a less violent one.”

So, in the year ahead what if law enforcement officers tried to be more civil to the public they are sworn to serve. Conversely, how about the public being more understanding of what daily life is like for those who wear a badge and come face-to-face with the worst society has to offer?

What if judges practiced being more patient with and civil to those who come before them? And here’s a call to all lawyers to be more civil to their clients and adversaries, more adherent to the law and less focused on finding winning loopholes and their billable hours.

Prison wardens and guards could be more civil to prisoners who, no matter what their crimes, are still human beings capable of responding to civility if it is shown to them. It’s the old biblical Golden Rule idea.

Social workers, emergency medical technicians and hospital workers, all overwhelmed by the never-ending needs of crime victims must also be treated with respect.  And in turn, those who are forced by circumstance to rely on their often life-changing assistance should respond with graciousness and thanks.

And what a different world it would be if even half of all those keyboard warriors, intent on spewing out ugly and anonymous social media posts, would just stop and think how they would feel if they were similarly attacked.  Again, Mom’s words echo in my head, “If you don’t have something good to say don’t say anything at all.”

Professor Forni’s simple idea has radiated from his base at Johns Hopkins University, out into the fabric of the Maryland community. The “Choose Civility” organization  in Howard County has attracted hundreds of sponsors that agree to follow a 15-point strategic plan to make their community a nicer, lower crime area in which to live.  The plan encourages simple things like respect for others’ opinions, time and space, taking responsibility for one’s own actions, speaking kindly and assuming the best about the people you meet.  A most important point:  apologizing earnestly when necessary.

I strive for civility, but I must admit I’ve been short, even downright angry, with others this past year.  I’ve said things I regretted because it just felt right in the heat of a moment. Sometimes I apologized later and sometimes I did not.

If it is true that a more civil society would have less crime – and that concept sure makes sense to me – how about in the year ahead if we all try to apply this concept?

Oh, and Dr. Forni believed one more thing. A person who conducts themselves in a civil manner has a lot less stress which results in improved health, safer driving and better workplace productivity.  Probably all of us could use a life with less stress.

Here’s wishing a Merry Christmas to those who celebrate and, to all, a very civil 2019!