BE CAREFUL WHO YOU LOVE – INSIDE THE MICHAEL JACKSON CASE

The explosive definitive account of the Michael Jackson saga, chronicling the King of Pop’s battles against child molestation charges from 1993 to 2005, from award-winning journalist Diane Dimond, who broke the story first.

Michael Jackson has long captured the world’s attention, first as the dynamic lead singer of the Jackson Five, then during his highly successful breakout solo career. But somewhere along the line Jackson transformed himself into something hardly recognizable and was investigated – not once, but twice – for crimes we could hardly imagine.

Even after his unexpected acquittal on multiple charges of child molestation, there is a sense that the real truth behind the allegations is not known. The character of Michael Jackson – from his humble beginnings to his rich career and the birth of Neverland Ranch – is destined for great debate among fans, journalists, historians, and psychiatrists for years to come. In the meantime, there is Diane Dimond, the journalist-of-record on the Jackson case.

In November 2003, when the Santa Barbara county sheriff’s department conducted another raid on Neverland Ranch, Diane Dimond and her camera crews were the only ones there to capture the moment and report the news to the world. Now, for the first time, Dimond recounts the multifaceted details of the Jackson case, utilizing her extensive notes and sources. What she tells us is a shocking story.

Be Careful Who You Love will take you behind the scenes and into the courtroom of one of the most controversial cases of the decade, while giving readers a dramatic glimpse of one reporter’s vigilance and unending quest to uncover the truth. 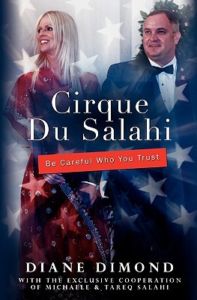 “Cirque Du Salahi: Be Careful Who You Trust” tells the INSIDE STORY of Michaele and Tareq Salahi — the never before revealed details of what happened before, during, and after their November 2009 appearance at the Obama administration’s first state dinner.

This journalistic autopsy reveals how one event can capture a ravenous media’s attention, become the fodder for bogus political drama, and with razor-sharp and misplaced attention, ruin the reputation of a politically connected couple who did little more than attend a White House function for which they believed they had an invitation.

Make no mistake. The copycat journalism surrounding the Salahis, which resulted in headlines like, “White House Gate Crashers Investigated, Likely to be Indicted,” could happen to any citizen who stumbles into the eye of a media storm. But this book is about more than what happens when the unsuspecting find themselves in the crosshairs of the national media. It reveals the truth about Michaele and Tareq Salahi: where they came from; what shaped their personalities; what obstacles they overcame; and what motivates them to do what they do. It is, quite simply, the background of the story heard ’round the world and how this couple, from the tiny town of Hume, Virginia, was able to survive the onslaught.

What happened to the Salahis is much more than any reality television show could capture. The true story about this couple should serve as a mirror held up to the media to point out the disturbing trend of overreaction from trimmed-to-the-bone newsrooms and the sensationalization of often non-consequential stories. It also offers a wake-up call to Americans who believe that their news sources of choice are still trustworthy, when in reality they are often simply parroting the poorly researched work of others.

Thinking Outside the Crime and Justice Box 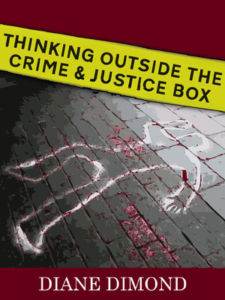 In this compilation of Dimond’s most thought-provoking syndicated columns, readers will be introduced to crime and justice situations they likely had no idea existed and encouraged to think outside the box about solutions to thorny issues. No true crime topic is off-limits for Dimond: from prisons to playgrounds, human trafficking to horrific serial killers, heroes to heroin addicts, Dimond’s keen eye for the compelling human stories at the core of crime often result in unforgettable columns.

In this book Dimond offers her work in specific chapters:  Our Fascination With Murder; When the Justice System Fails – the Human Toll; Mass Media, Social Media and Crime; Crime and Justice Warriors and many more. Column updates and new chapter text make this book a true-crime buffs must read.